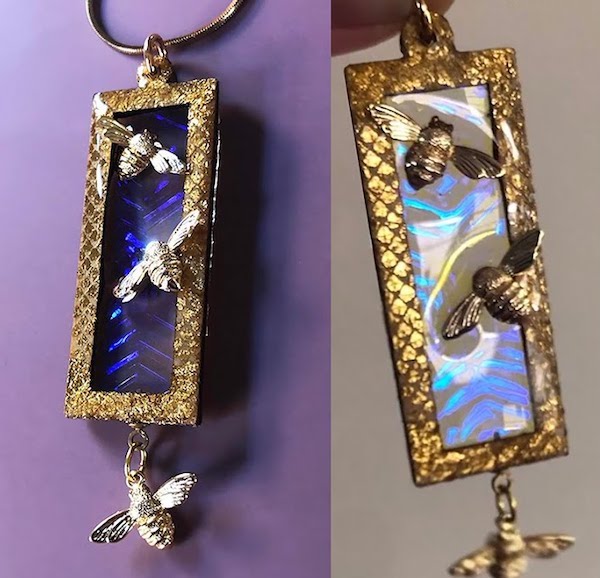 This short video shows how the translucent film captured inside the wood frames changes hue depending on whether the pendant is on a dark or light background.
She goes over how she made the pendant in her tutorial here including how to attach the dichro-ISH film to the back.  She has a good tip on letting the resin get a little thicker before placing the bee charms on the resin. Otherwise, they will easily sink down or won’t stay put.

As always, Fran gives readers a 15% discount for anything on Little Windows. Just use the code : BG1516.

Did you notice that some of my laser cut wood have been playing hide and seek on Etsy earlier this summer? For several weeks, Etsy’s bot inexplicably deactivated some of them as they were sold and/or renewed. Then after a while, they would reappear in my shop, after a staff member reviewed and released them.

The most common reason for deactivation is copyright or trademark infringements which was not the case with my listings.

The automated message explaining the action each time read :

Etsy prohibits the sale of highly regulated items, including (but not limited to), necklaces, bracelets, or anklets composed of a string or strand of small amber beads, chips, or nuggets smaller than 1.25 inches.

You can well imagine my puzzlement.  The affected listings were laser cut wood not strings of small amber beads.  The penny dropped after I came across a number of cautionary tales from other sellers about not using the word “amber” even as a color description as it would trigger the deactivation bot.
There are still retailers out there (just google “baltic amber soothing”) who make unsubstantiated claims such as amber releasing a pain-relieving substance, succinic acid. A 2019 Australian scientific study showed that succinic acid found in amber beads is not released with skin contact and it is not an anti-inflammatory.
Teething necklaces of any sort, not even those with “break away” clasps, should never be used for babies and toddlers because of the strangulation and choking hazards. There are other safer ways of soothing teething babies!

Teething necklaces are no longer allowed on Etsy.  But you can still see amber jewelry and amber bead listings. I suspect the bot is relatively new and has to be trained to allow legitimate sellers or the affected stores haven’t yet been found by it.

Huge sites like Etsy, Facebook, Twitter, Instagram etc rely heavily on software for policing as there are millions of new listings or posts each day. Bots (not physical robots but computer algorithms) in social media play a huge role in propagating fake news and disinformation today.  (See University of California Center for Information Technology and Society’s : How is Fake News Spread? Bots, People like You, Trolls, and Microtargeting)

So what had all that to do with my laser cut wood?  Well, I laser cut Baltic birch and I included these words in my listings – item description and my tags. Guess where amber is mostly from? The Baltic region, hence Baltic amber. The bot picked up the word Baltic and equated it to amber.

I removed the word from all my birch wood listings, reported the issue to Etsy and they have reactivated all my affected listings. Problem solved.

This blog may contain affiliate links. I do receive a small fee for any products purchased through affiliate links. This goes towards the support of this blog and to provide resource information to readers. The opinions expressed are solely my own. They would be the same whether or not I receive any compensation.