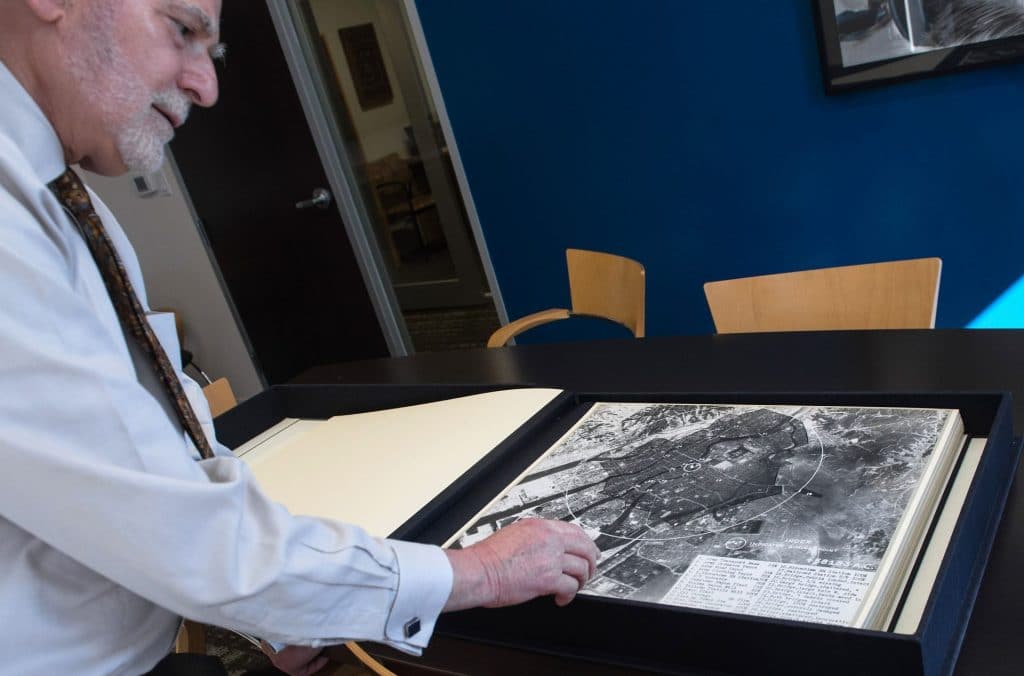 Michael Krepon and the gift of meaningful work

Michael Krepon, co-founder of the Stimson Center think tank, shows an aerial picture taken by the US military in the days after the first atomic bomb was dropped on Hiroshima on August 6, 1945. The institution subsequently gifted the photos to the Hiroshima Peace Memorial Museum. (Photo credit: NICHOLAS KAMM/AFP via Getty Images)

Michael Krepon, who died last week after such a long battle with cancer, lived his life more honestly than anyone I have ever met.

Obituaries will tell you what the man did, but Michael’s magic was in how he did it. Michael was, by any measure, extraordinarily successful. He wrote or edited more than 20 books and co-founded the Stimson Center. There will probably never be a full accounting of all his accomplishments because those deeds were done in so many different arenas. I know how transformational his work improving space security was in the mid-2000s, because I saw it first-hand. Others will say the same thing about his earlier work on reducing nuclear dangers in South Asia. I wasn’t there, but I don’t doubt them.

The man’s life was so wide ranging that he didn’t always remember his comings and goings. One day, while digging through some old documents, I came across a five-page email he wrote documenting the conversations he had during a 1996 trip to Beijing. This was a goldmine to me, working on China’s nuclear posture, because contacts were much more limited back then. On the rare occasions when Westerners went to Beijing to have meetings on this topic, they often didn’t write them up—or, if they did, they usually weren’t as insightful or eloquent as Michael. He had never once mentioned this to trip to me, so I emailed him. Michael had forgotten that he’d gone.

It doesn’t surprise me that there were things about his career we never got around to discussing. When I got to spend serious time with Michael—usually when he vacationed in Carmel, I’d drive over to the Highlands for a cocktail—we didn’t talk about articles or think tanks. The topic we returned to, over and over again, was what it meant to live a life of meaning and purpose. Michael was so moving when he talked about the value of surrounding yourself with loving people and the importance of living in a life-affirming place.

But most of all, he impressed upon me that meaningful work could also be one of life’s great gifts. Michael would be quick to say that one could find meaning in many kinds of work, including the kind of difficult work one does to provide for a family. So he also understood how privileged we were, because we could work on something that we loved and that we believed made the world a safer place. Not everyone gets to do that, and it can be an enormous source of strength. I am sure that his sense of purpose helped sustain him through his very long battle with cancer. When I say that, it sounds trite, like something on a mug. But when Michael lived it, it was a thing to behold.

Michael’s wonderful talent for living meaningfully inspired many of us to try to do the same. (Note: It’s not as easy as he made it look.) This is often what people mean when they refer to Michael’s role as a mentor. While Michael was certainly a mentor to me and to others in the conventional sense, that word seems so inadequate. Michael didn’t make me a better writer or help me improve my presentation skills. He showed me how to be a better person and helped me up when I was down. Once, during a particularly difficult time in my life, Michael wrote a sweet, simple note on scrap of paper and handed it to me. I carried that note with me for years. If I am a better writer or analyst thanks to Michael, it’s because he spent so much time trying to help me live a more fulfilling life.

That’s not to say that Michael didn’t offer practical mentoring advice. He did, and it was terrible! We liked to laugh about one the first pieces of advice he gave me: Lose the blog.

Michael soon changed his mind. He was never the sort of person to be stuck in his ways or hold on to an argument out of ego. He was able to adapt and thrive, moving into writing online just as easily as he moved between working on outer space and South Asia. It was, I think, his passion for meaningful work that allowed him to move so easily between eras. He was taking up social media at a point in his career when so many of us would be screaming at the kids to get off the lawn.

Michael ultimately spent more than a decade contributing essays and reminisces to the Arms Control Wonk blog. Six-hundred seventy-six entries between May 2009 and his farewell this June. In that final essay, where he shared his prognosis, he urged us to keep working to make the world “safer by filing down the sharpest edges off nuclear weapons while adding new means of reassurance.” It was from this message that the Washington Post quoted in the final two paragraphs in Michael’s obituary.

I am so sorry that Michael did not know that, after such a meaningful life, something he wrote on a blog would be his last word. He would have loved that, one of life’s little jokes about the surprises in store for us. In my mind, I can see the smile spread across his face as it did so many times. I can hear his funny laugh, too—the sort of laugh that fills you with his sense that life is precious, a joy, and best with a purpose.